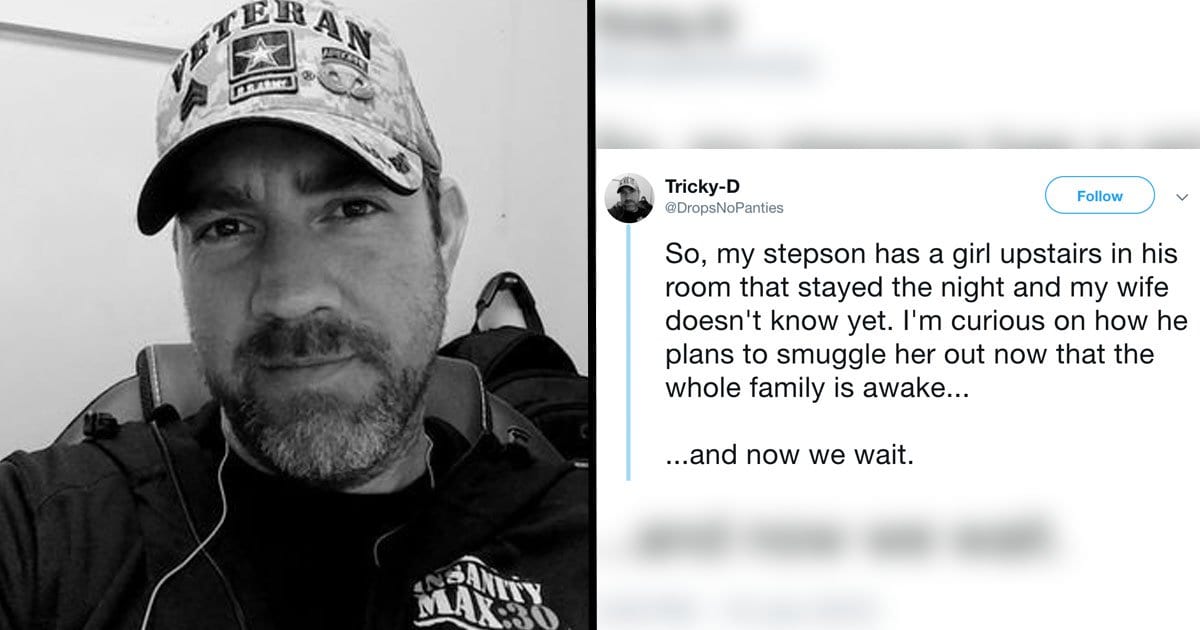 Upon waking up one morning, one man happened to notice that something in his home wasn’t quite right. He quickly deduced that his 18-year-old step-son had a lady guest who’d stayed over. The question was, however, how to handle the situation. Should he confront his step-son? Help the kid out of what might have been a tricky situation? Or stay out of it but tell the story step by step to the entire digital world? He chose the third option, and left us with this brilliantly funny Twitter thread to read over and over again. But was his step-son successful?

A young dad, who goes by the Twitter username of “Tricky D,” was put in an awkward situation when he saw that his stepson was trying to sneak a female friend out of the house. As a result, he decided to document the events on his account.

It seemed like Tricky D knew that this was a scenario that many people on social media would be instantly intrigued by. And it all began with one cheeky Tweet.

As Tricky D had anticipated, the people were desperate for more content. Sure enough, he had plenty of updates to share with the masses of fascinated Twitter users. Firstly, his stepson’s lady friend was still in the house.

However, tensions were on the rise as his oblivious wife decided it was time to give the home a good clean. In Tricky D’s mind, this was a perfect opportunity for the strange visitor to make a daring escape…

Not only did Tricky D post written updates of the miraculous escape that was ensuing. He also posted photo updates, giving Twitter users visual indicators of the lovebirds’ progress.

Take this photo, for example, which clearly shows the entrance of the home, shoe rack included. However, we have found those infamous, white, pristine sneakers that his stepson’s girlfriend took off upon entering. Who said you can’t be discrete and polite at the same time? The plot thickens…

So there was Tricky D’s wife, enjoying her Saturday cleaning session. Just like that, she decided to crank up the Backstreet Boys Greatest Hits to full volume as she cleans the grime out of the bathtub.

Is there any other way you’d like to spend your weekend? Little did she know though that the loud music would drown out any younglings trying to vacate the premises without being noticed. She didn’t even notice Tricky D behind her as he took this photo.

While the two young lovers were enjoying the pressure of escaping the house unnoticed, they nearly got a little too carried away. As the mother finished her cleaning in the bathroom, she decided to proceed down to the kitchen.

However, as she walked down the stairs, the kids realized that she had a direct vision of the front entrance – their only possible way of escaping! She might not be able to hear them, but she could definitely see them…

For those who were lucky enough to stumble across this awesome Twitter thread, they had no choice but to drop everything they were doing and keep their eyes on what was happening.

Large swathes of the Twitter community were rooting for Tricky D’s stepson and his girlfriend to evade the clutches of his wife. One person posted this tweet, hitting home just how gripping they found the entire scenario. You could cut the online tension with a knife.

Despite his previous brutal comments, the stepdad began to feel some sympathy for the poor girl. Just like Juliet, this damsel in distress was not getting out of there anytime soon.

Tricky-D tweeted that he could hear movement in the room above him. He noted to anticipating followers, “It’s 10:39 and this poor girl hasn’t had a chance pee this morning.” Being a human with normal bladder movements, he was beginning to feel a little worried for the girl.

Getting The Poll Rolling

After considering the torturous stress of having to wait several hours for the bathroom and checking out the mixed responses from his previous post, Tricky-D decided to mix things up a little. He created a poll.

“So who we rooting for??” He asked, providing two options – Young Love or Mama Bear. Given his feeds were live, the results instantly came in. But did people want this girl to make her escape or mum to get in the way?

It was not long until results came piling in. Gradually the percentages fluctuated, but soon there was one clear winner – Young Love. Winning by a near landslide victory, most Twitter users decided that they would root for these crazy kids in love with a record 63% in favor. 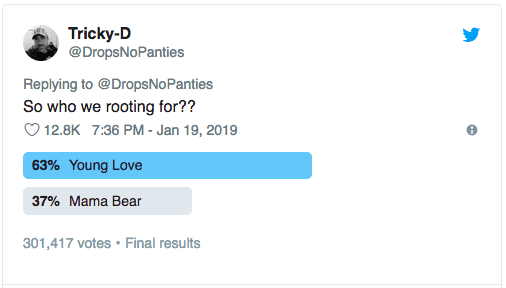 Unfortunately, with only 37% Mama Bear was less in favor. Perhaps it was this which may have led to some disturbing comments Tricky-D would receive later on about his wife…

As the vote turned out to be fairly divisive, one Twitter user, @LizRdz13, shared her vote to her thread, laughing (through the use of emojis) about how she had opposing views to her boyfriend. 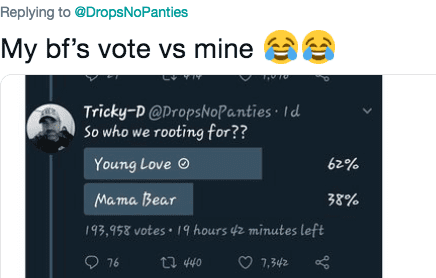 She shared the fact that she had unsuccessfully voted for the losing side, while her (possibly more romantic) boyfriend had gone for ‘Young Love’. In the world of social media, this is, sadly, the kind of thing that can tear couples apart forever!

A little while later, Tricky-D updated his audience. Still concerned for the girl’s abdominal pain he explained how he thinks the two lovebirds “might be waiting it out” for their big break.

Meanwhile, one concerned follower decided to offer some assistance on the situation. @ItsMeAshleyWee replied to the thread a humorous GIF of a man jumping out of a house window. 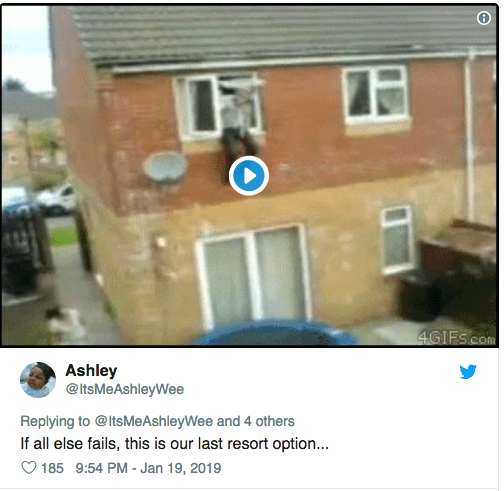 She captioned it, “If all else fails, this is our last resort option…” While this may have seemed like a good idea for the girl in question, the end result did not work out so well for the man in the video. Perhaps the response to her would be – do not try this at home.

One user began to become concerned after Tricky-D had not updated users for a while. Thinking back to the poll, she commented “Do we need to do a well check? Did the wife kill everyone?”

Unfortunately, Tricky-D did little to alleviate this Twitter user’s anxiety and most likely increased tension amongst many other followers. He simply replied that he was still “waiting” and still “watching” at that point, suggesting he was not sure if her suspicions were going to come true – perhaps this would end badly, perhaps not.

Users were in full anticipation now. Not only were they worried for the girl’s bladder, but they now feared for her life too!

But You’ve Already Lived Up To The Hype!

At this point, everyone on the internet pretty much was waiting on the edge of their seats along with the stepdad. Would the boy be able to sneak his secret lover outside of the house to safety?

Would the mother discover about the clandestine operation to get the little lady out of her home? Only time will tell. Stepdad was patient, but not everyone was as disciplined.

One Twitter user had a really bad time trying to wait patiently and made sure we all knew it. Once, we were all forced to brave through commercials, because if you left to go to the bathroom, you’d have missed part of the program.

These days things are different, and we admit that it feels like years since we saw a commercial. At least he gave credit where credit is due because there’s no way we’d trade places with that girl at that moment!

Somehow, the young lover passed the first real challenge, the one that might have outed her to the mother. She couldn’t hold it any longer, so went all the way downstairs to use the toilet. 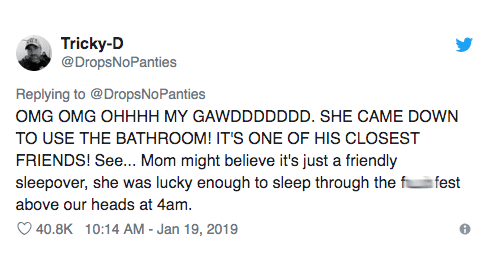 She risked it all just to relieve herself, which very likely could have been a terrible idea. So did Mama Bear catch the young lover in her tracks? Would she even suspect anything amiss if whatever happened the night before completely went over her head?

No, She Didn’t Care

At first, it was completely unclear what happened. Tricky-D wasn’t able to find out exactly what had happened, but his wife told him nothing. Maybe in her intensive cleaning spree, she completely missed the fact that there was another person in the home.

Maybe she just figured it was her son having a study session or maybe hanging out with a platonic friend of the opposite gender. What’s certain is those kids are pretty lucky…

The boy was able to remove all incriminating evidence before a final escape, it appears. There seems to be a strong chance that they will be able to get away without Mama Bear ever finding out anything was amiss.

That is, if her husband decides to keep the secret. We have to give the kid credit where he deserves it: he’s really able to remain cool under all that pressure. I don’t know if I would have risked it with my mother.

After all that suspense, the young lovers were able to spirit away through the side door. And with that, the world got a front row seat to a master working his art. He was able to completely go under the radar and avoid detection by his mother.

She would know nothing – for now. As for the twists and turns along the way that made this so entertaining, we all owe Tricky-D for broadcasting it to a wider audience.

Send ‘Em On Down

While most people who find that they’ve suddenly been catapulted to internet fame try to capitalize on it by sharing their personal projects with their newfound audiences, Tricky-D decided to buck the trend again and use his attention to help others. 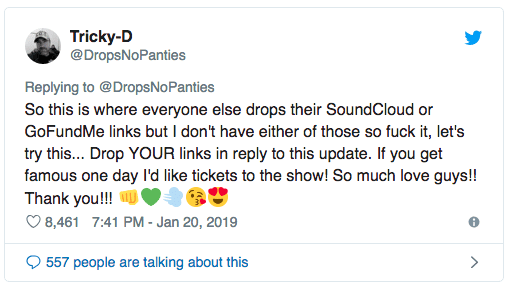 Rather than putting out a call to action, he simply asked that his followers share their own projects. It was a simple request that proved once again just what a cool guy he was.

Slaving Over A Hot Stove

In the meantime, a few users began to question why he was just watching his wife clean the house rather than helping her. As he would reveal with his next tweet, Tricky-D had no intentions of being a slacker, even while he was live-tweeting the family saga. 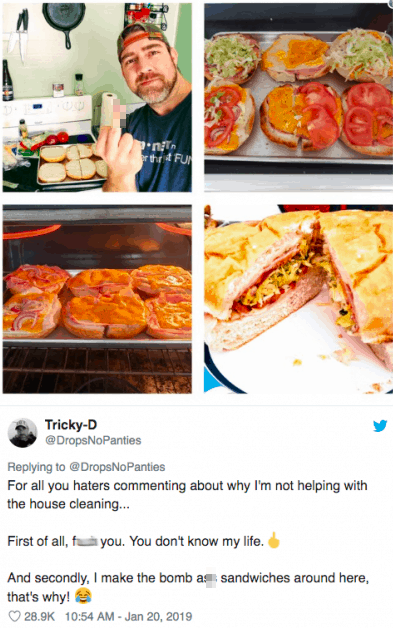 His next week showed that he was preparing an elaborate lunch for the entire family, quickly re-earning his new followers’ respect for the way he helped out around the house while becoming Twitter-famous.

Several users decided to enter into the conversation by offering Tricky-D a few suggestions to make him even more of a hero to is stepson. One user named David Johnson suggested that he just put a ladder outside of the window. 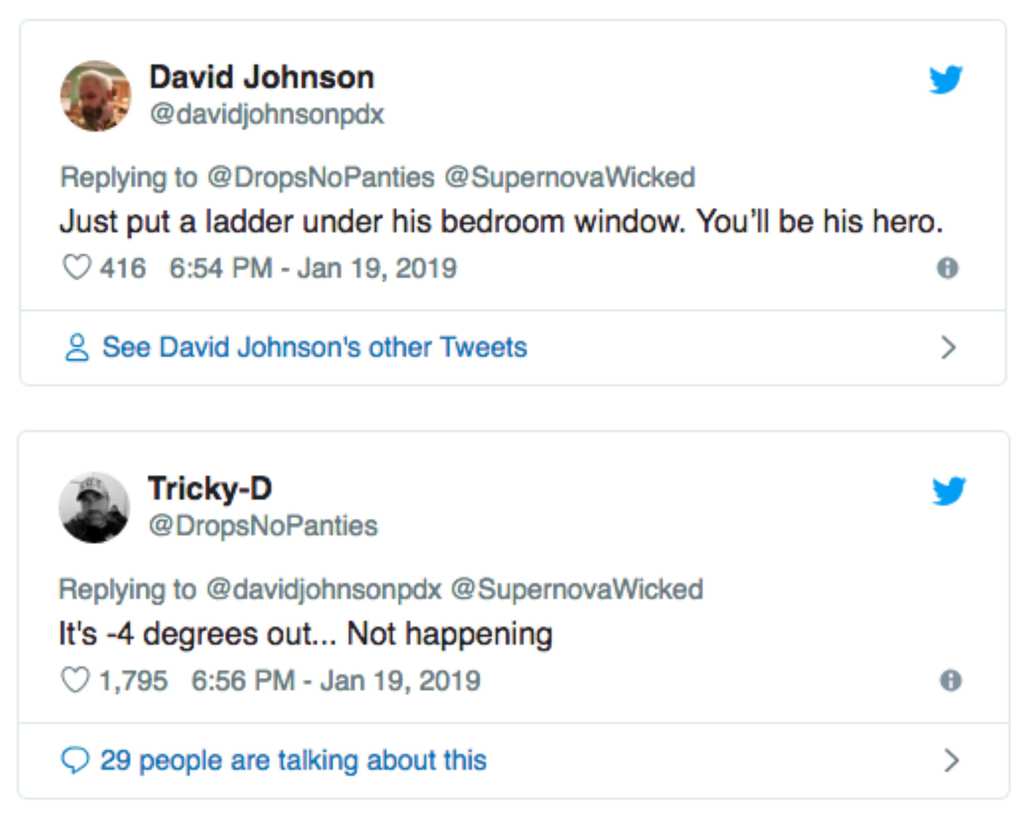 However, Tricky-D was prepared for that. Aside from possibly being even less discreet than the white shoes, they were located in Michigan in the middle of a cold snap that brought the temperature’s outside down to -4 Fahrenheit.

Tricky-D’s thread quickly gathered over 400,000 likes and over 80k retweets, showing that truly anyone can get noticed if they have a good enough story to tell. As some users shared in response, they found the story so compelling that they waited on tenterhooks for the ultimate conclusion. 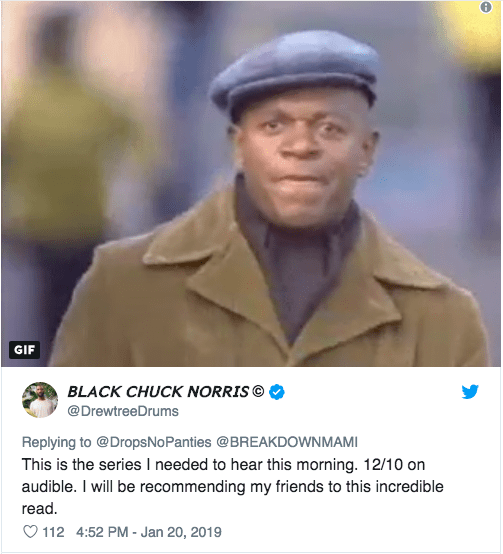 One user even wrote in that they would recommend reading this story to their friends, showing that this tale of the cool stepdad was truly a universally relatable story.

A number of users weren’t so convinced that Tricky-D’s wife was so oblivious to what her son was up to. Some even suggested that maybe she was cleaning so furiously because she was so annoyed by her son’s choice. 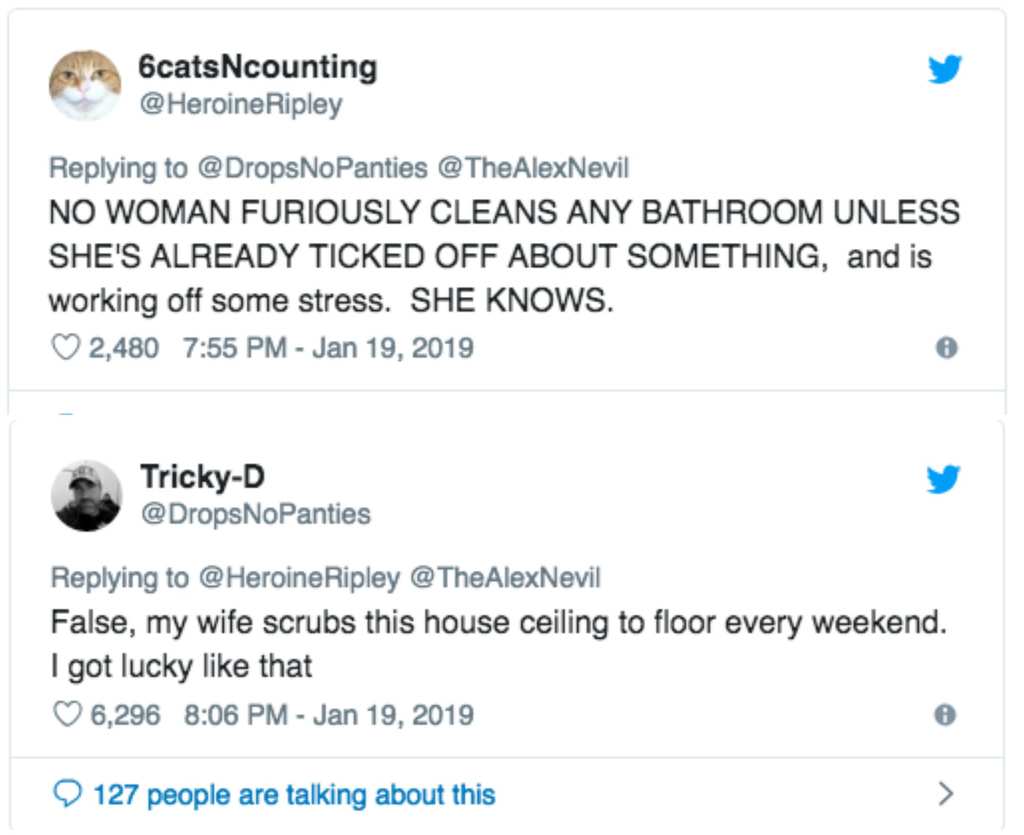 However, Tricky put that idea to rest, explaining this furious cleaning is par for the course. At the end of the frenzy, Tricky revealed that mom knew the girl had stayed over, she just didn’t know the dirty details until she checked Twitter.