We’ve all heard them. We’ve all groaned at them in unison while unsuccessfully trying to keep the grin on our face. Dad jokes are an unoriginal or unfunny joke, usually told by middle-aged or older men, and of one variety: a bunch of bad puns. Really bad puns with predictable and cringe-worthy punchlines.

They’re not all corny, and they usually make us chuckle, even if we don’t want to admit it. Looking for a good (or bad) laugh? Here then are some of the best dad jokes we found on Twitter. 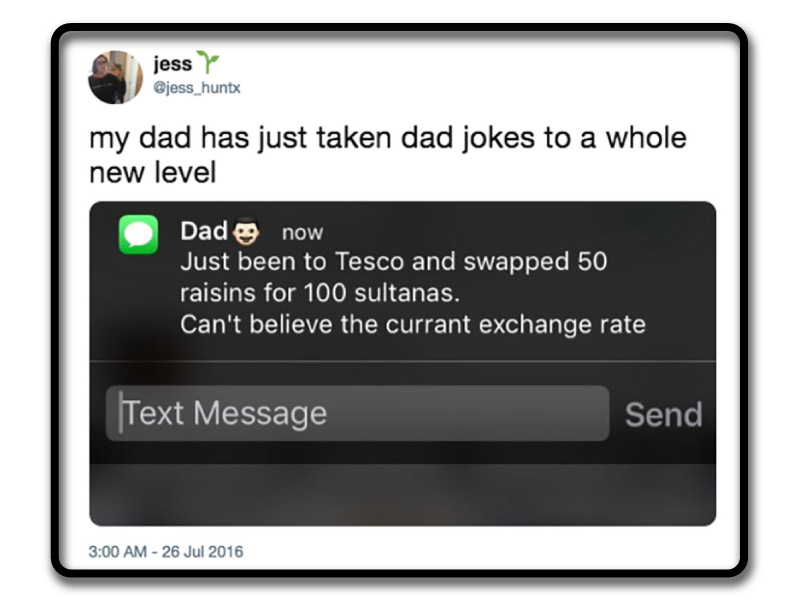 This comedic father was really “raisin” the bar. His daughter tweeted out a screenshot that quickly went viral. Follow the thread for more grocery-related jokes.

What a Marvelous Joke

Which planet do you think dads belong to?

Not Safe for Parties 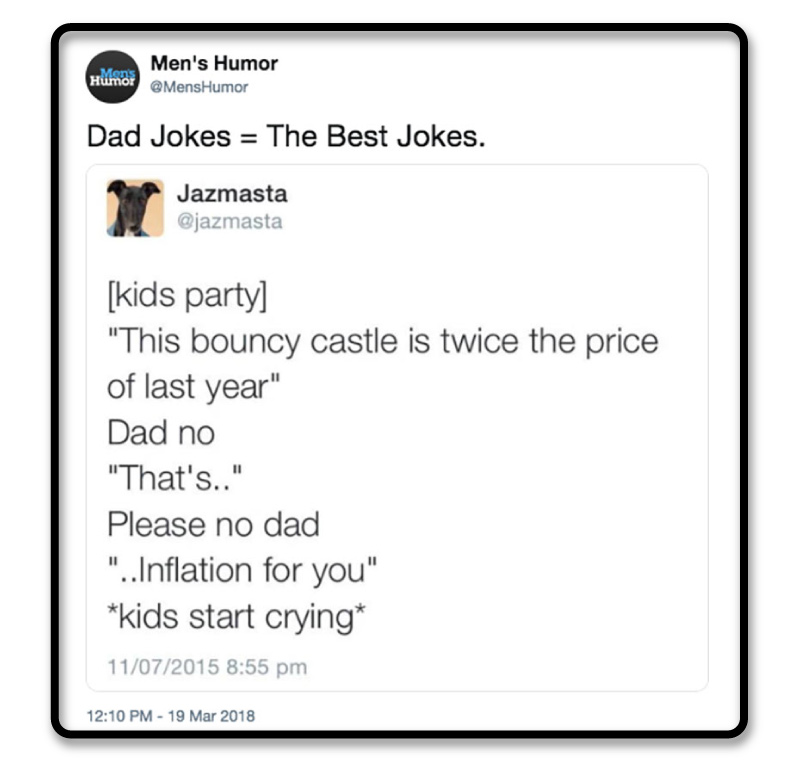 It almost makes us rethink the need of bouncy castles at parties.

Word on the Street

Pro tip: Don’t stop singing “Wonderwall” because who will save this wife from her husband’s jokes?

This Islamic educator is a true dad joke maven. You definitely did not see that coming! 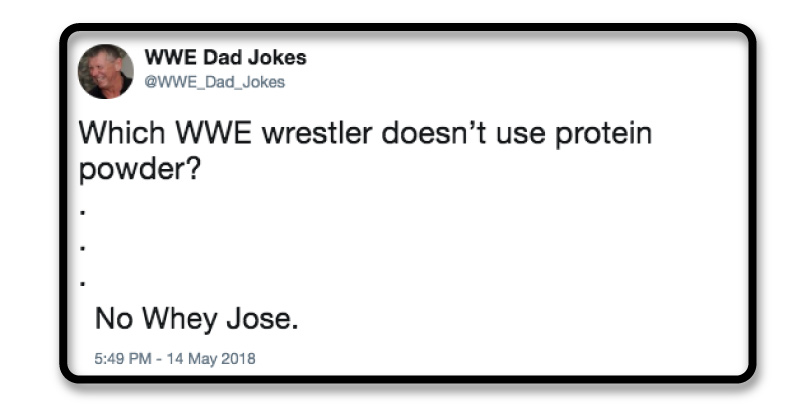 Not all wrestlers load up on the good stuff; some do stay away.

Solo Eclipse of the Son 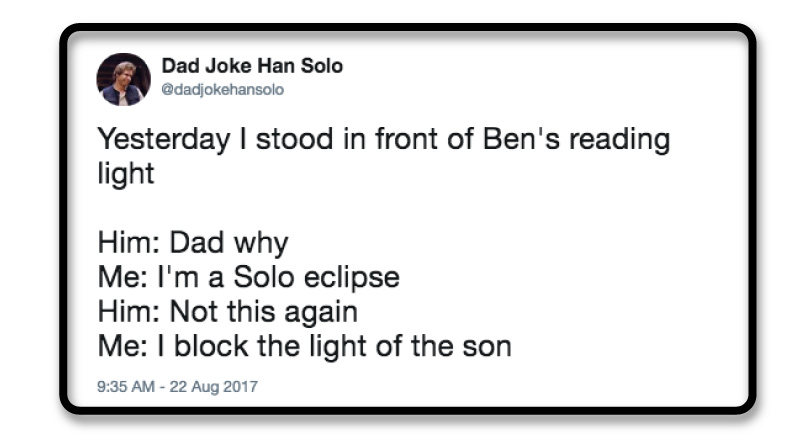 What if “Star Wars” added dad jokes into its script? This is what Han Solo would sound like! 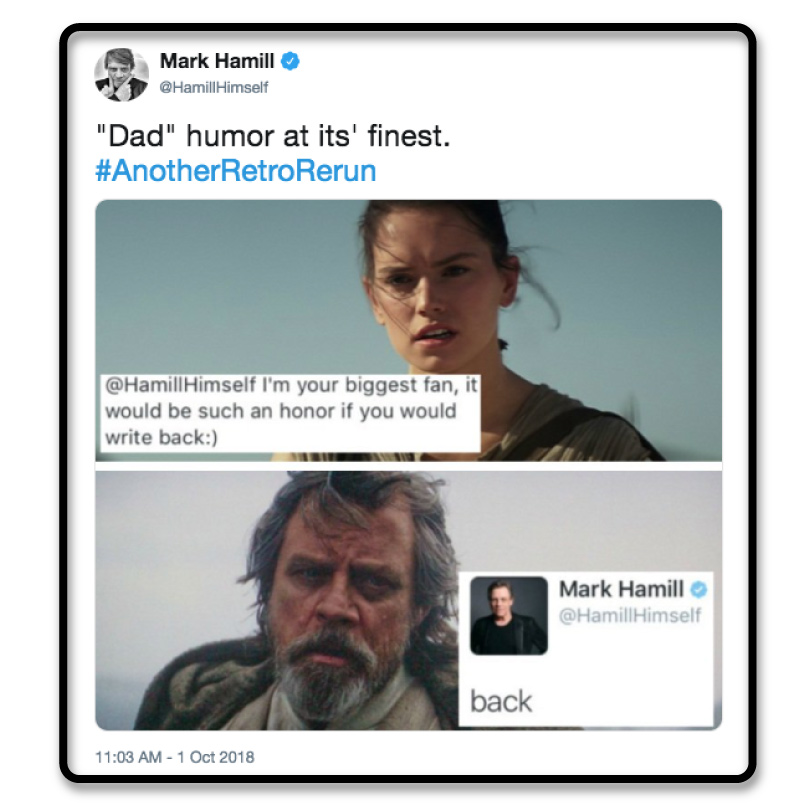 Does this mean Luke Skywalker is Rey’s father? Cue the fan theories.

It will be freed up at about 1 gigabyte per second! Brexit lends itself to many a humorous situation. 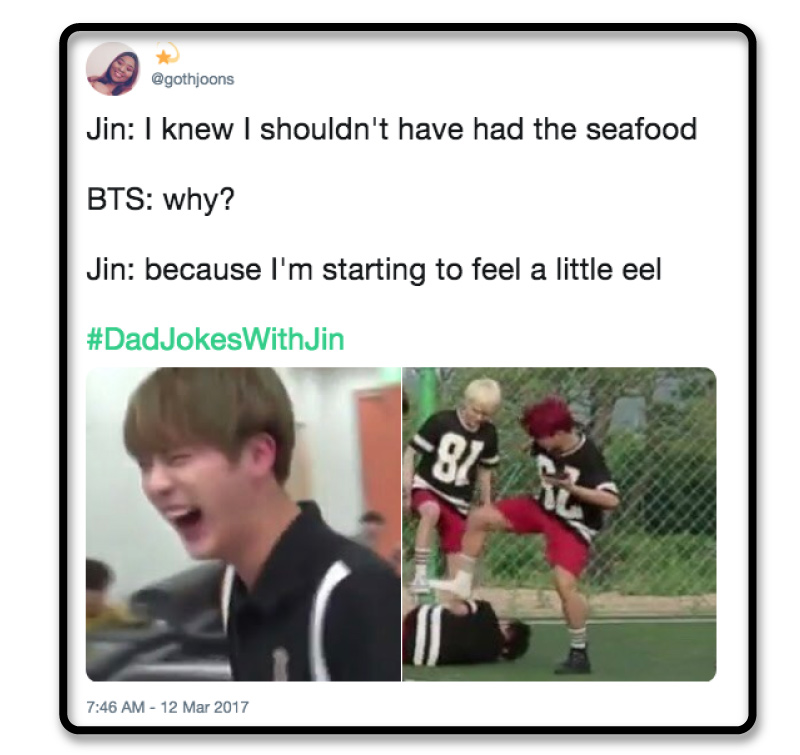 Kim Seok-ji or Jin from South Korean band, BTS, is known for his ridiculous dad jokes. The fans love it even as they groan along.

Dads can sometimes be adorable and even worthy of being taken out to nice meals at restaurants.

Shaun McKnight is at the top of the totem pole when it comes to dad jokes. He actually curates them on Twitter, and his daughters approve!

What’s in a Name?

Sometimes, dads don’t need too much inspiration to decide on a baby name.

Little known fact: If you blink 182 times, Blink 182 bassist Mark Hoppus appears and will tell you a dad joke.

A grizzly bear can be no match for a dad determined to impart some knowledge.

Dad Bods Are In

Do the Hokey Pokey 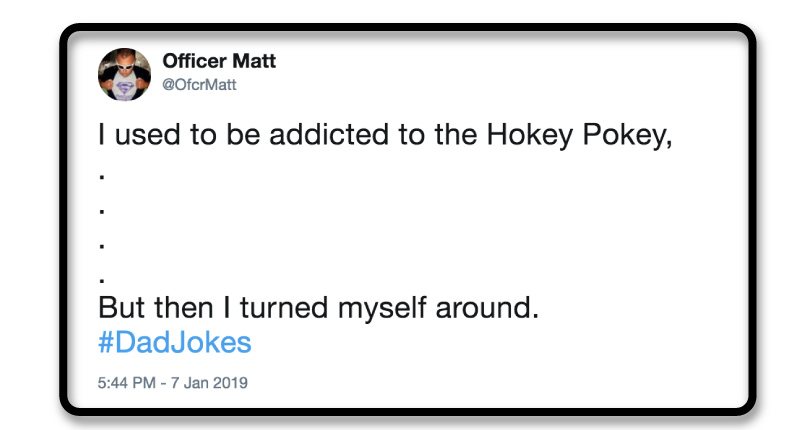 Because, sometimes, that’s what it’s all about.

Are you a Powerpoint Ranger?

Stick to the horror writing only, Stephen King! 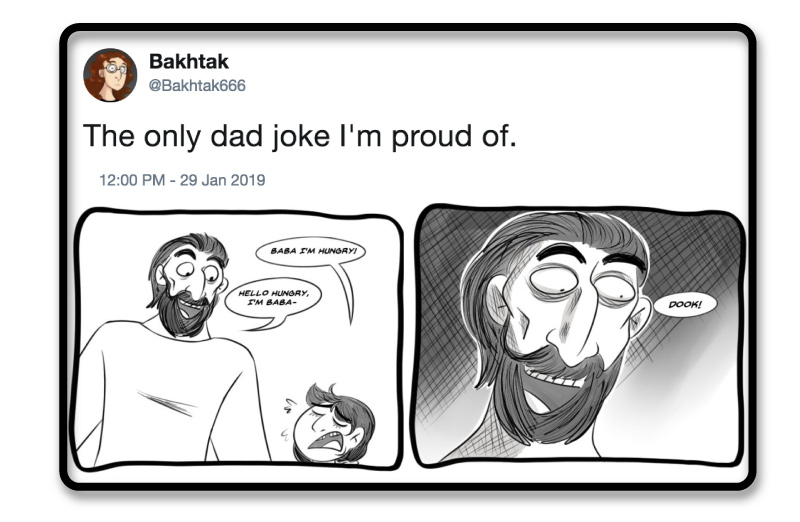 We love this twist on one of the first and most popular dad jokes ever. Get ready to be horror-fied!

It’s not the most obvious dad joke but gets points for imagery. Someone call M. Night Shyamalan stat.

All Hail the Queen 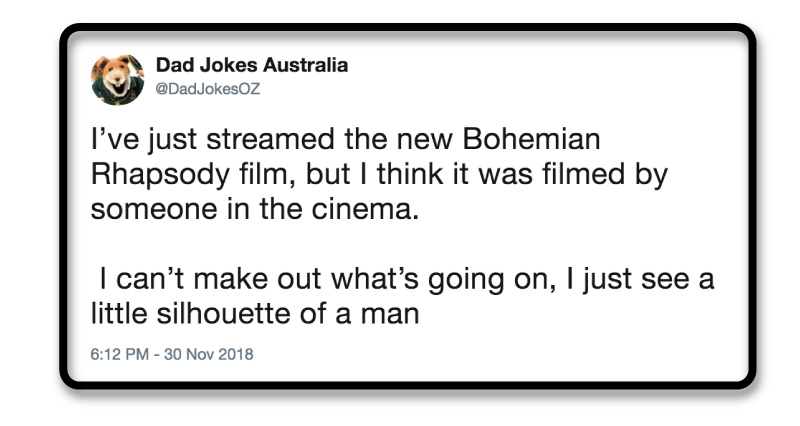 We think Freddie Mercury would approve. 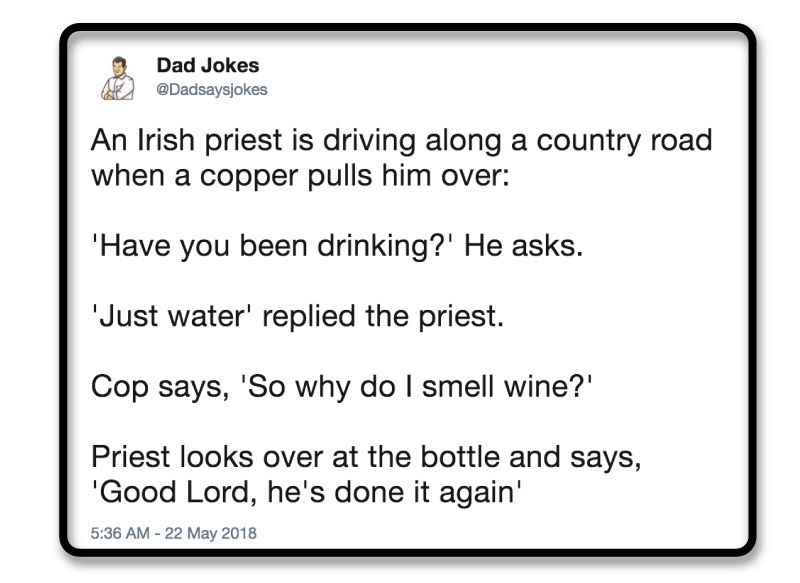 The lord would certainly not approve of these lies.

Do You Think Jokes Are SEC Approved?

The Securities and Exchange Commission (SEC) has a regional branch that takes its role a bit more humorously online. Regional Director Shamoil Shipchandler is responsible for many of the account’s #DadJoke gems.

Should this journalist be free to “espresso” his own opinion? 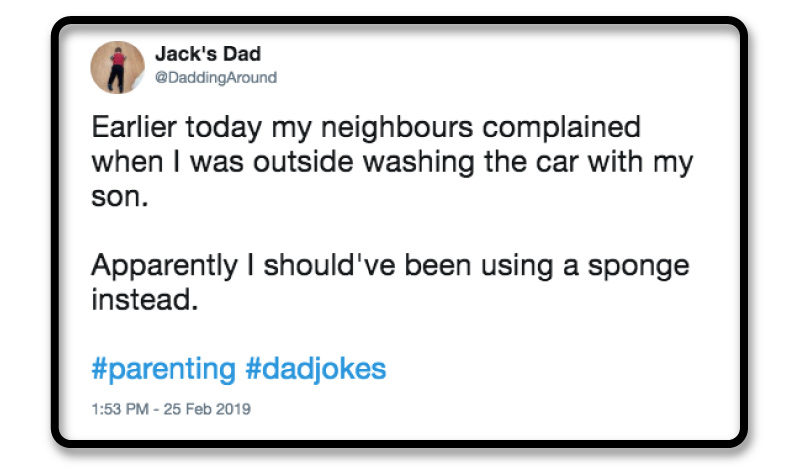 This ordinary dad of two frequently tweets about being a father and the parenting mishaps he experiences. We think he has resorted to dad jokes to get back at the kids for all the projectile vomit clean-ups, being woken up at odd times and dinners eaten off the floor. 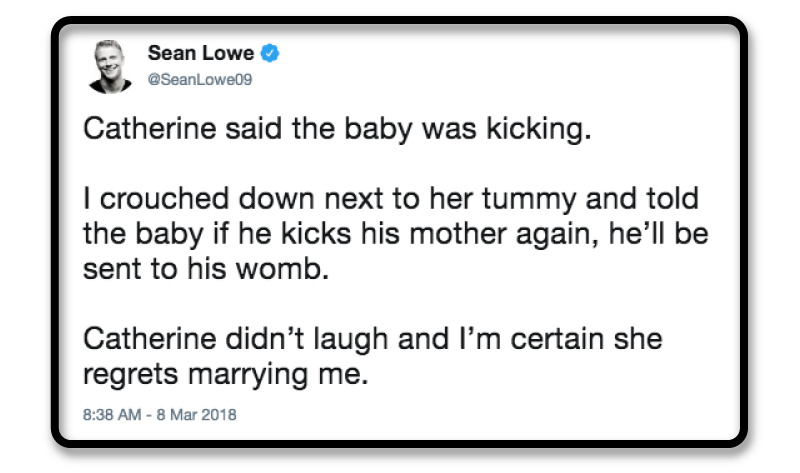 This legend — television personality Sean Lowe — started with the jokes even before his baby was born. His wife wasn’t impressed, but everyone else was. It’s the level of “dadness” most men want to reach.

Waiter, There’s a Dad Joke in My Food! 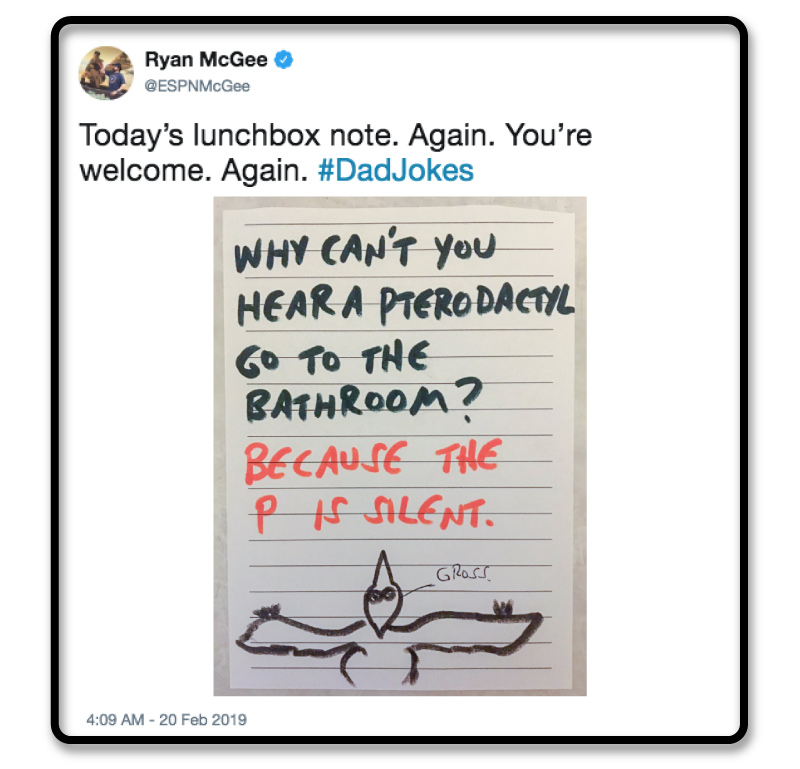 The senior writer at ESPN packs lunch boxes with special notes for his kids. The sweet surprises in it are the jokes, accompanied by scrawny pen drawings. This is off-the-menu content we don’t deserve (or need).

The Vest Is Yet to Come

This is just another dad making his way through fatherhood with humor, wry observations and good investments.

Not a dad, but definitely on Tinder. We would have to swipe right on this! 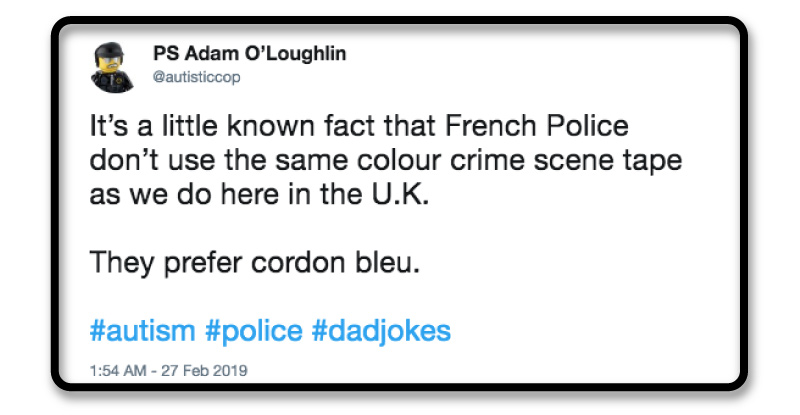 This neighborhood sergeant usually tweets about his work and living with autism. And he doesn’t let anything come in the way of him and his jokes, ever.

This former athlete and proud father takes his pooping seriously. 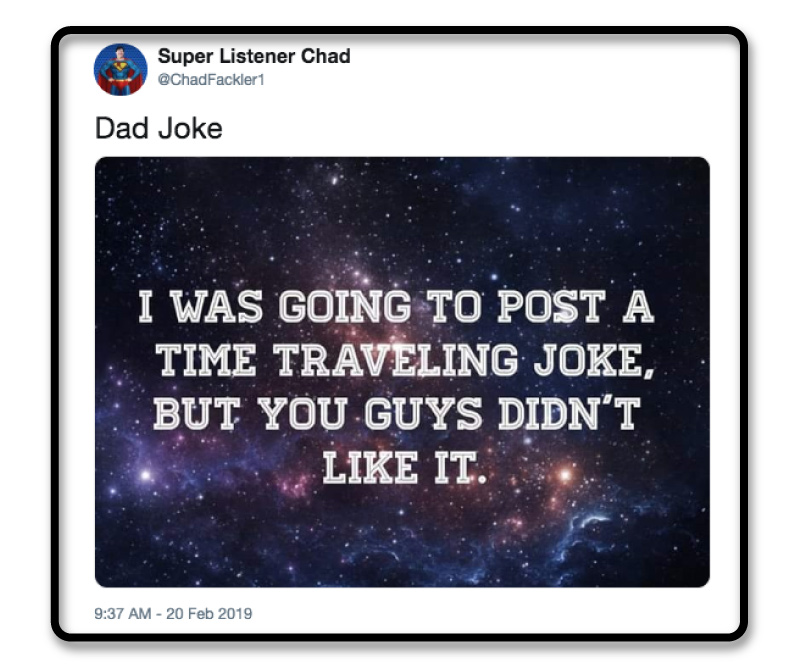 Only a tech nerd can come up with a joke that’s heavy, yet funny. 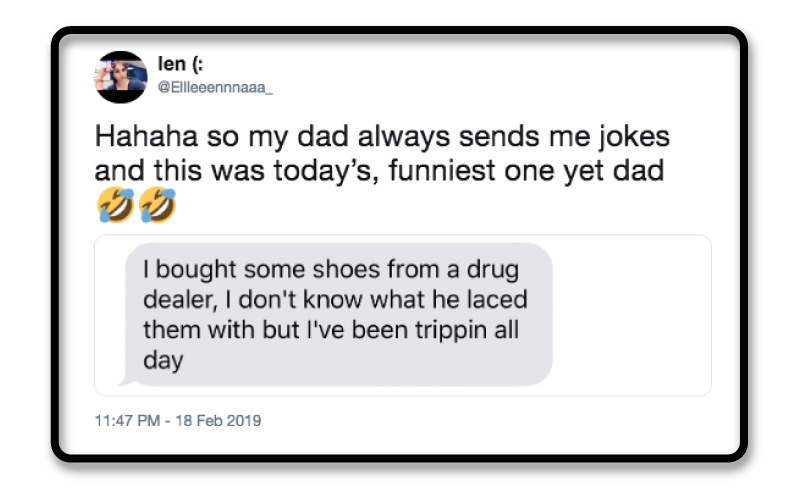 This father is on his own trip. 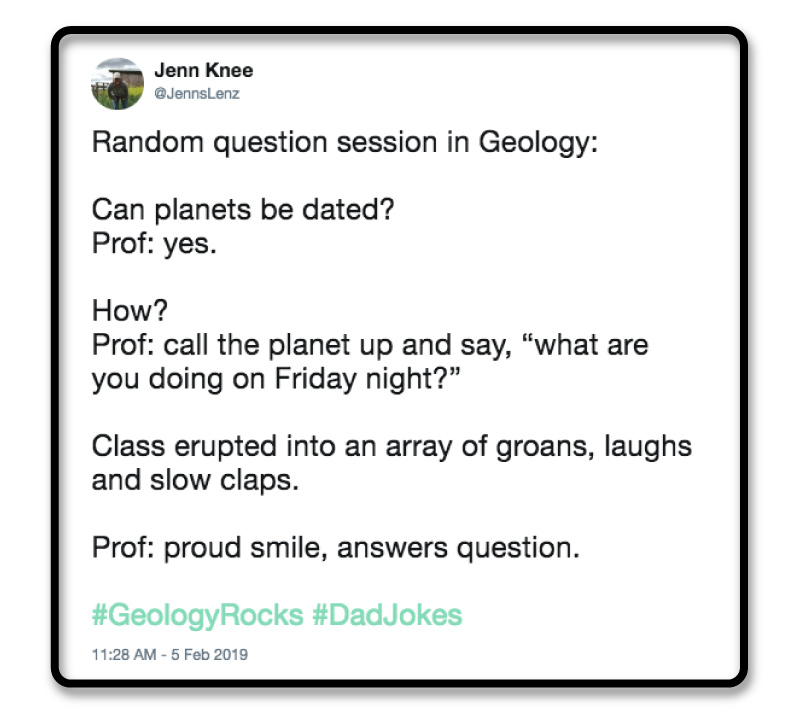 This geology professor is one true genius.

Science Is No Joke 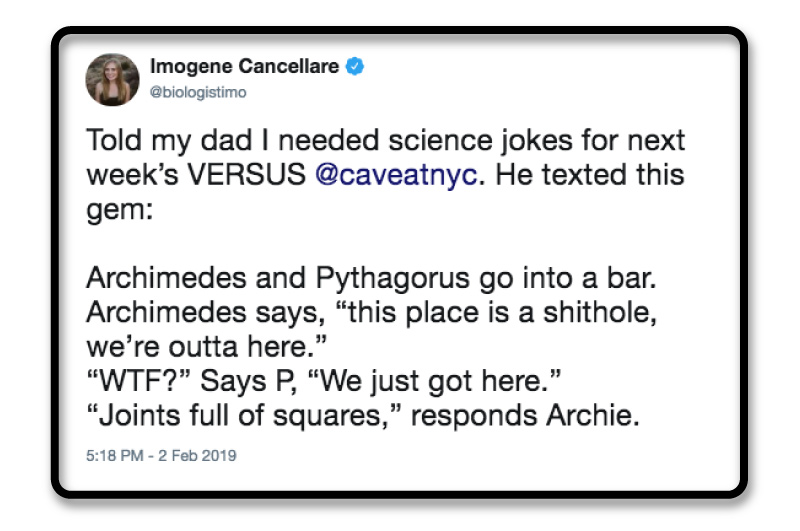 When in doubt, ask the parent. Give this dad an honorary science medal already.

It’s the heartwarming story of the jungle that isn’t feature in the “Jungle Book.”

Two Toms Walked Into a Bathroom… 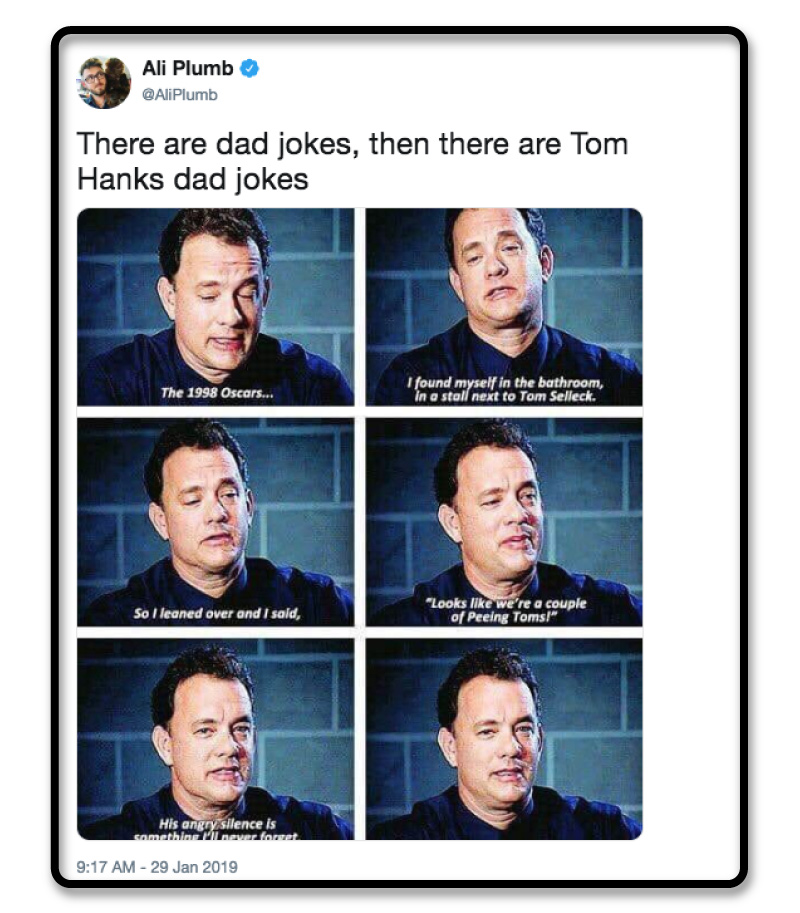 There are dad jokes, and then there are Tom-Hanks-told-in-the-bathroom-at-the-Oscars-dad-jokes. 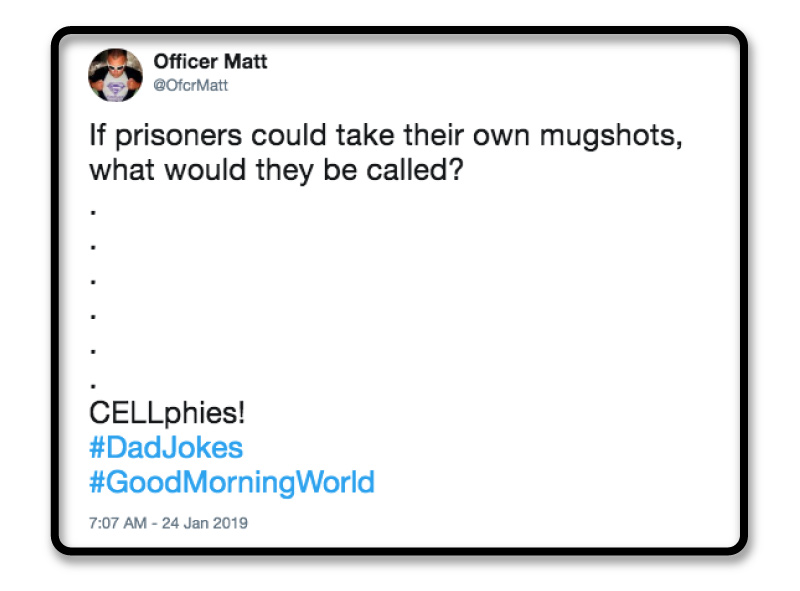 This Is Top Gun!

We think Loggins would be proud of this karaoke attempt.

A Star (War) Is Born 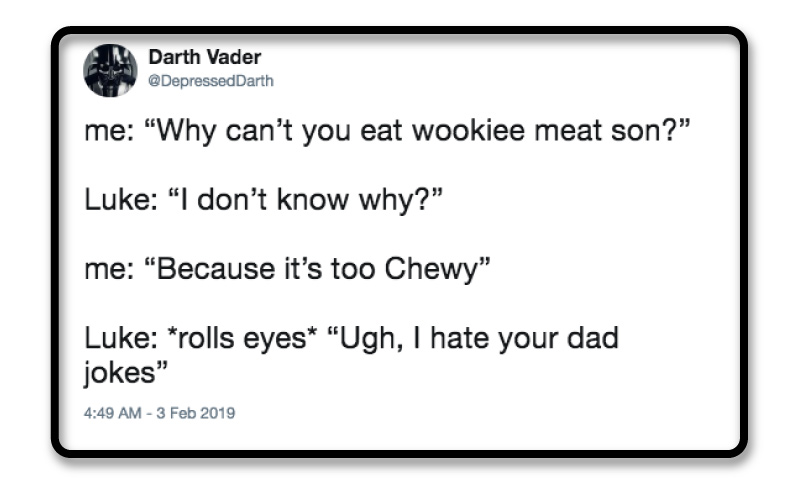 Even when depressed, Darth knows how to keep on giving those punch lines.

The next furry convention will be lit! 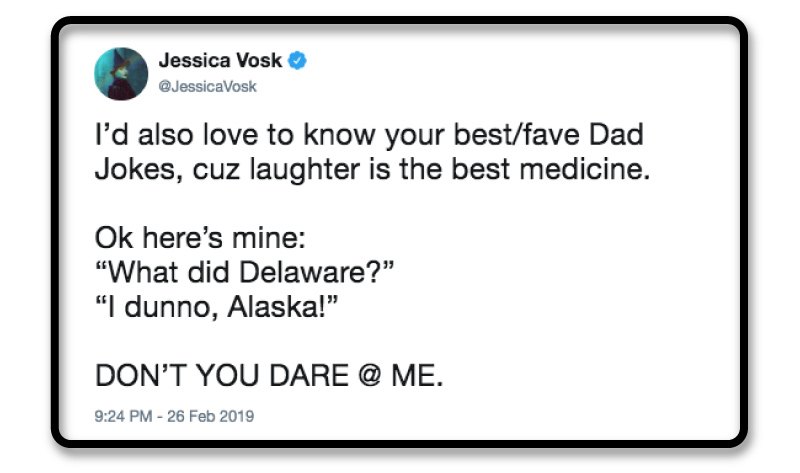 Jessica Vosk is no dad, but the actress/singer, best known for her role in “Wicked,” believes in the power of humor. She gets a pass because this joke, though old, is still gold. 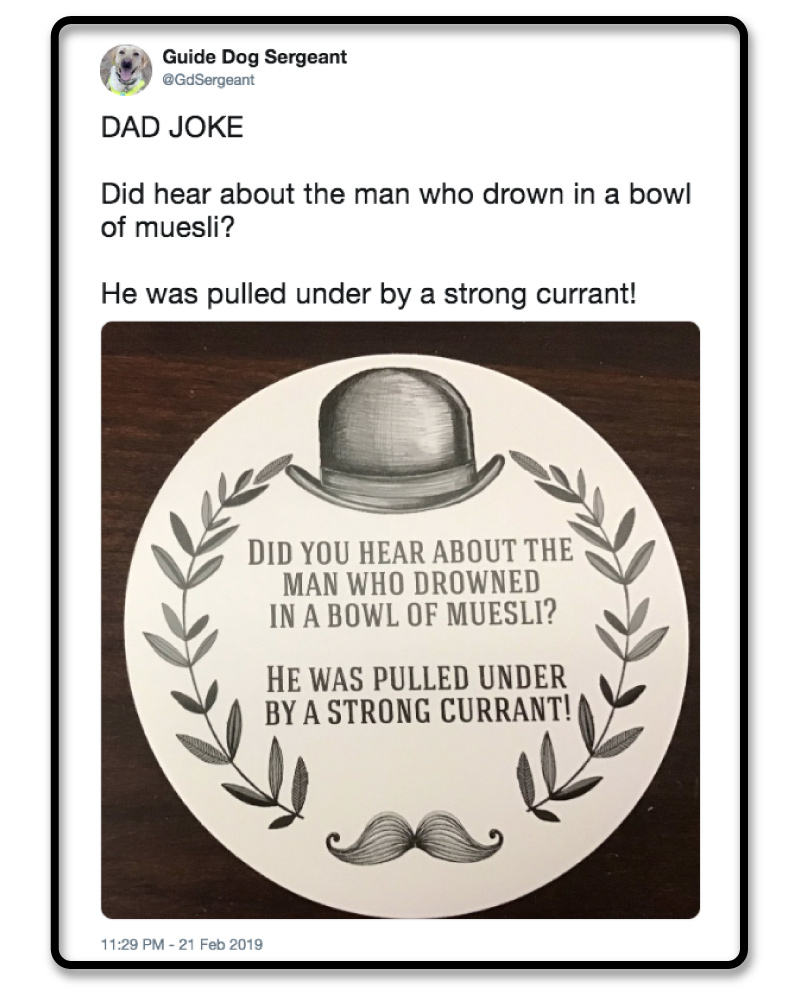 Not exactly a dad, but here’s a guide dog with a sense of humor that relates to dads.