Horrible bosses can drain you. They can stifle enthusiasm. And they’re bad for the economy.

On the flip side, if you’re currently working with a bad boss — or have ever had one — you’re significantly less likely to become one yourself. But knowing that still doesn’t make it easier to work for a difficult person.

What may help, however, is a little humor. And being reminded that you’re not the only one in this situation. So here are some of the most egregious (and sometimes most entertaining) tweets from and about horrible bosses.

The Boss Who Doesn’t Respect the Weekend

Saturday is for sleeping and relaxing, not working.

It’s hard to be a good leader or manager if you’re not even sure if you’re the boss.

The Boss With No Boundaries

Maybe you have a good relationship with your employees. But this is a little too close for most people’s comfort.

The Boss Who Blurs Lines

It’s never a good idea to get too close to your boss. Or they may become your ex…boss.

The Boss With No Compassion

This boss certainly sounds pretty callous to fire someone who is already going through so much.

Puns aren’t always welcome in the workplace, even if they’re as brilliant as this one.

The Boss Who Doesn’t Walk the Walk

It’s hard to respect someone if they’re busy telling you what to do but they don’t do the basics themselves.

Some bosses don’t waste any time sugarcoating what they mean.

The Boss Who Dishes It But Can’t Take It

When talking to your boss, there’s always a fine line between “the truth” and “what they want to believe is the truth.”

The Boss Who Doesn’t Know What They’re Talking About 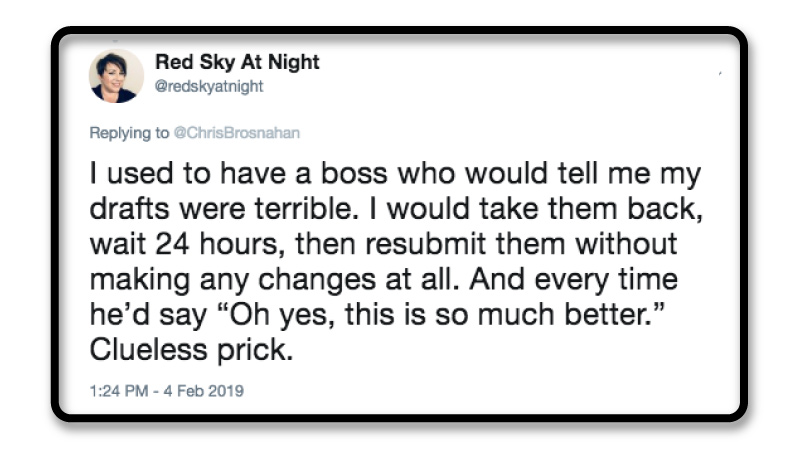 Easily one of the most infuriating things about bad bosses is the fact that they often don’t know what they’re talking about (and you theoretically could call them out on it, but you really can’t). 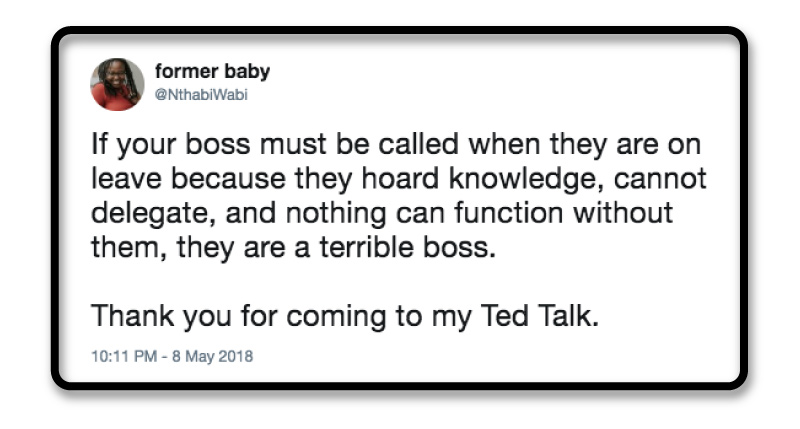 If you don’t set up an environment for your workers to thrive and be productive while you’re gone, you can’t ever leave and that’s not their fault.

The Boss Who Makes You Question Your Sanity

The only thing more frustrating than being given more work is when you’re condescendingly told you’ve already been told to do something (and you know you weren’t). 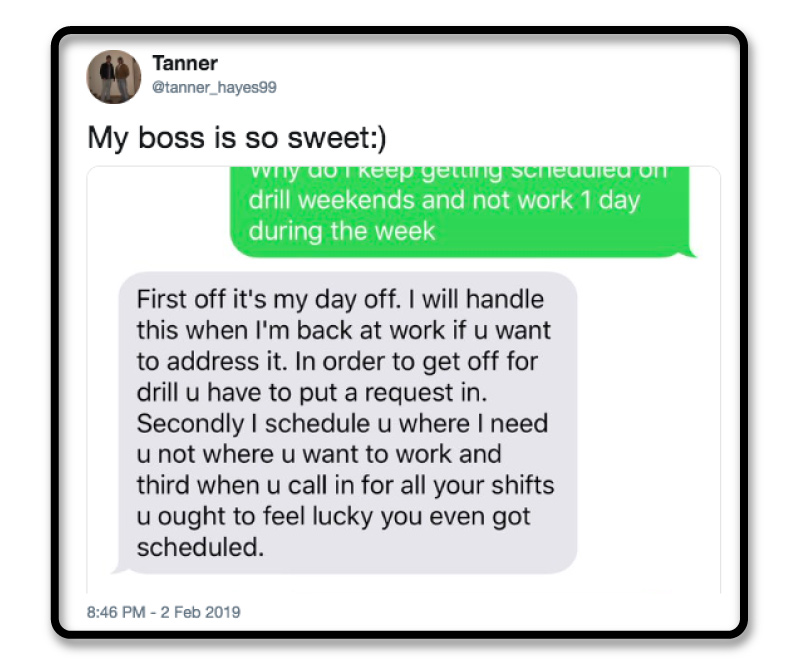 You know you may not be your boss’s favorite when they tell you that you should feel lucky to work even minimal hours.

Even if they’re a nice person, it’s hard to work with a gross boss.

The Boss Who Tries Too Hard to Be a Fun Boss

It’s always both way too early and way too late to do the Macarena in the office.

The Boss Who Screws You Over 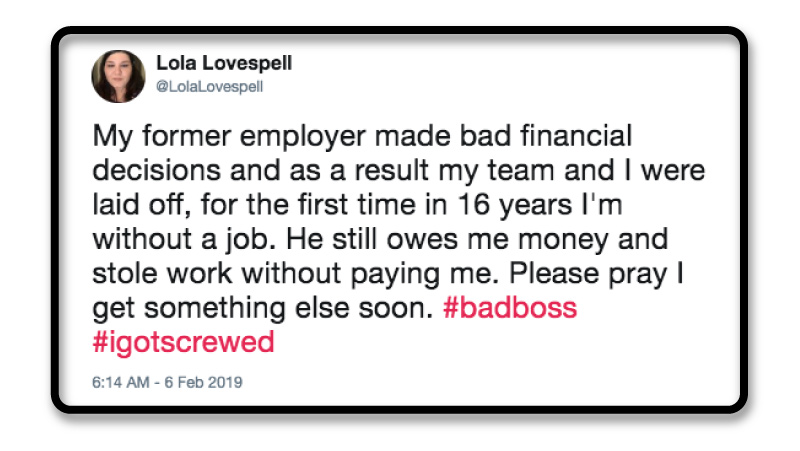 Some bosses can’t be trusted to look out for anything other than the company (and their own) interests.

The Boss With Double Standards 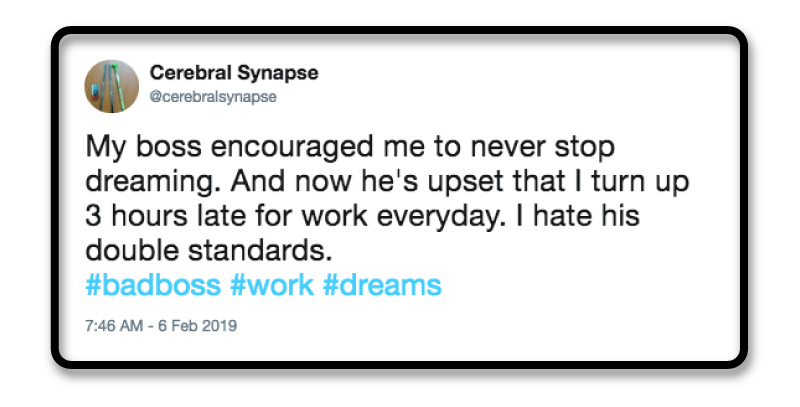 Be careful what you wish for, boss, because you just might get it.

Not everyone wants to share personal life details with their boss, especially if their boss may use that knowledge to get you to do more work. 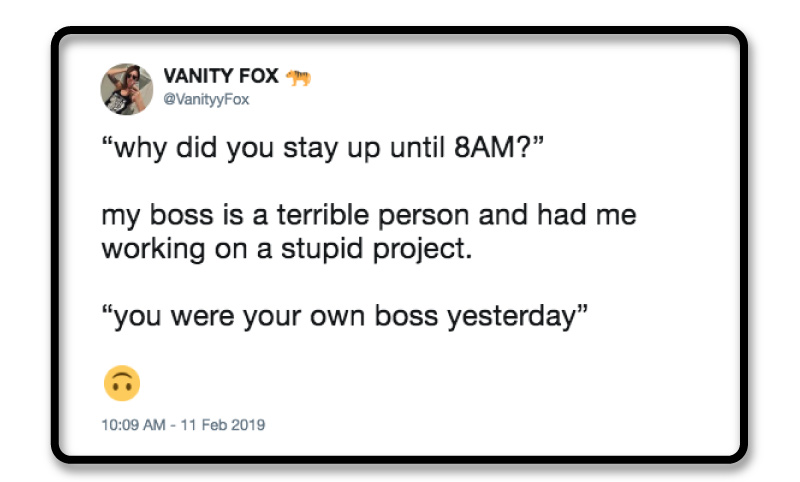 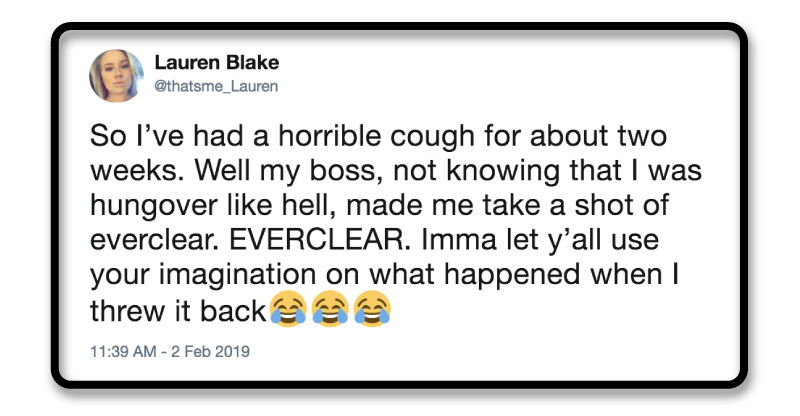 Some bosses don’t understand that you need medicine and/or rest to get better from a cold. You do not need an old-timey shot of hard alcohol like they did back in the Wild West.

It’s bad enough if your boss says something you don’t understand, but making you figure it out off the clock seems like an extra dose of rude. 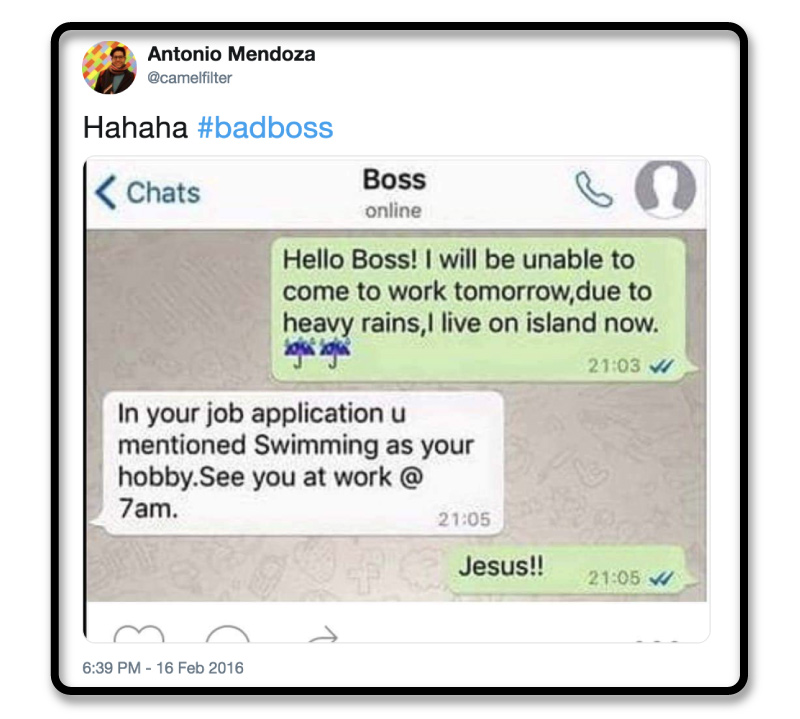 It can be frustrating when your boss expects you to go above and beyond to get to work no matter the weather conditions.

Is it so hard to simply say, “Good job”?

The only f-word that’s welcome in an office setting is “Friday.”

Even if someone is having an “off” day looks-wise, you don’t need to point it out. Ever. 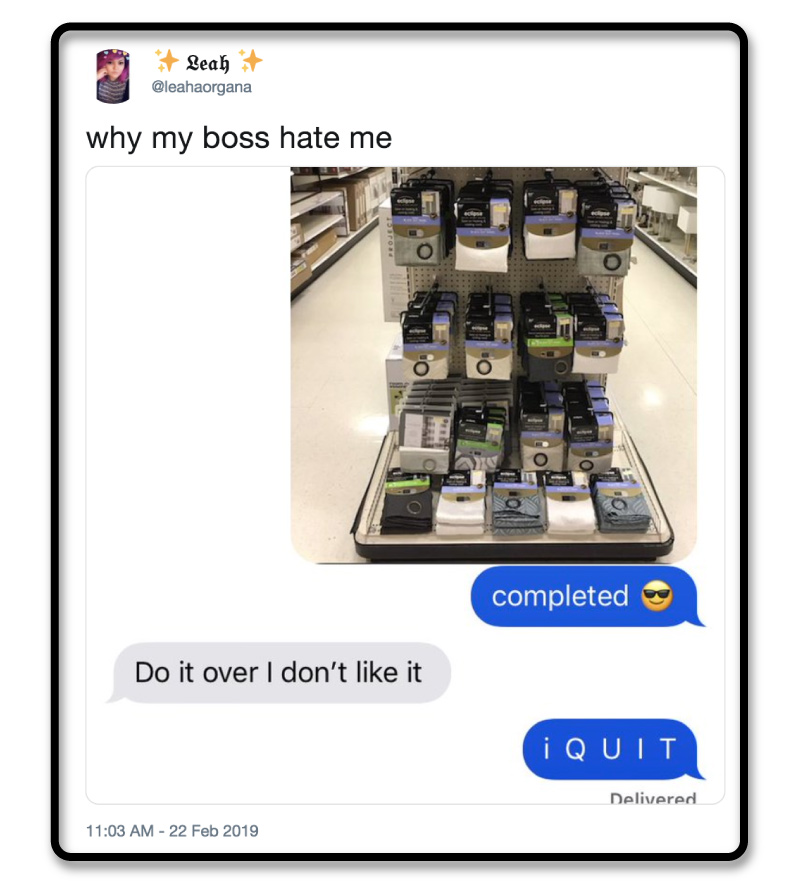 Some bosses will call your bluff when you threaten to quit. And, in doing so, they’ll usually win the fight.

One man’s roses are another man’s corpse. 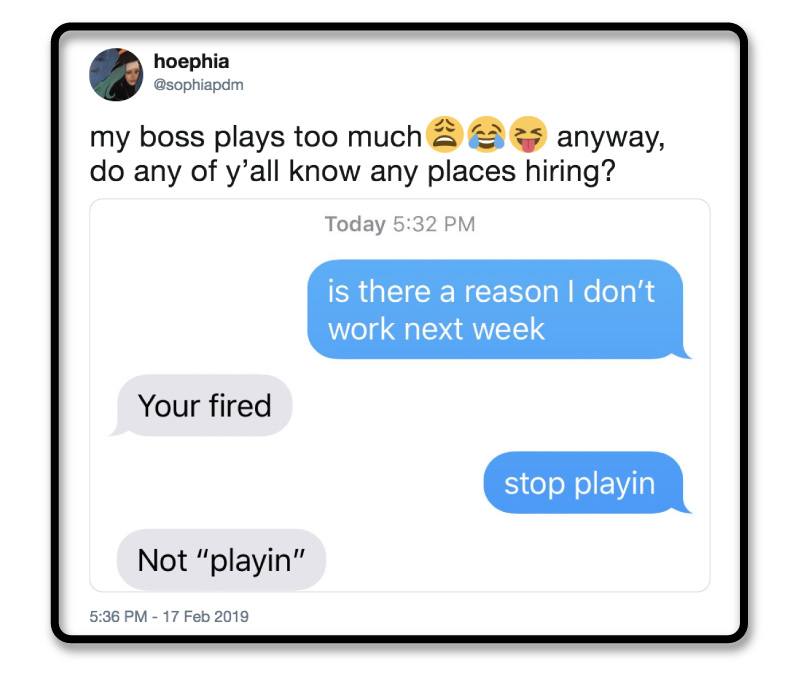 Getting fired is tough. But finding out you’ve been fired via text message? That’s extra rough. 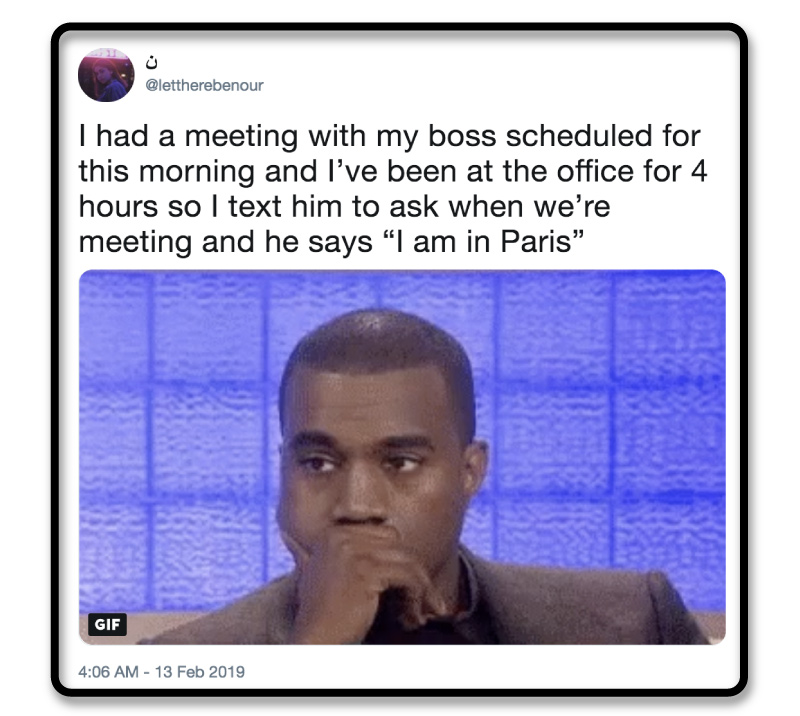 It doesn’t exactly inspire a great deal of faith in your boss when they stand you up for a meeting because they’re in another country and failed to mention it. 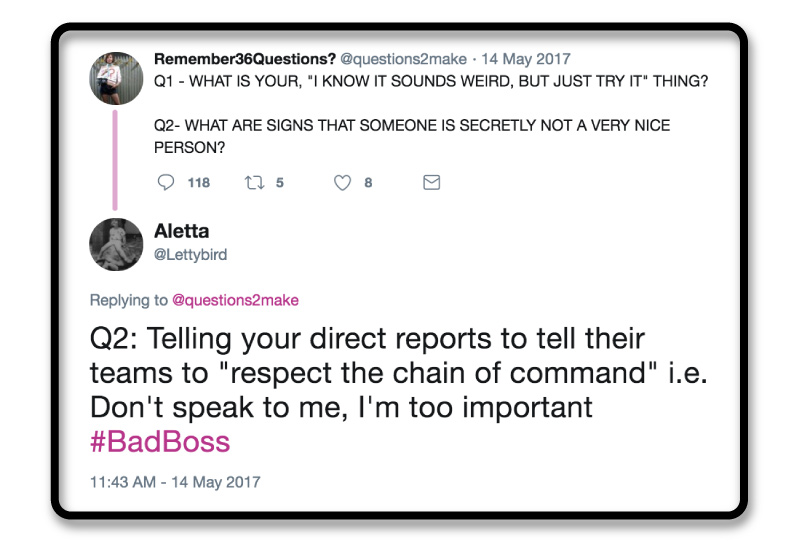 A boss that goes out of their way to not be approachable usually isn’t a great leader.

What’s even worse than a boss who won’t stop talking to you is a boss who knows they’re interrupting you and can’t help themselves. 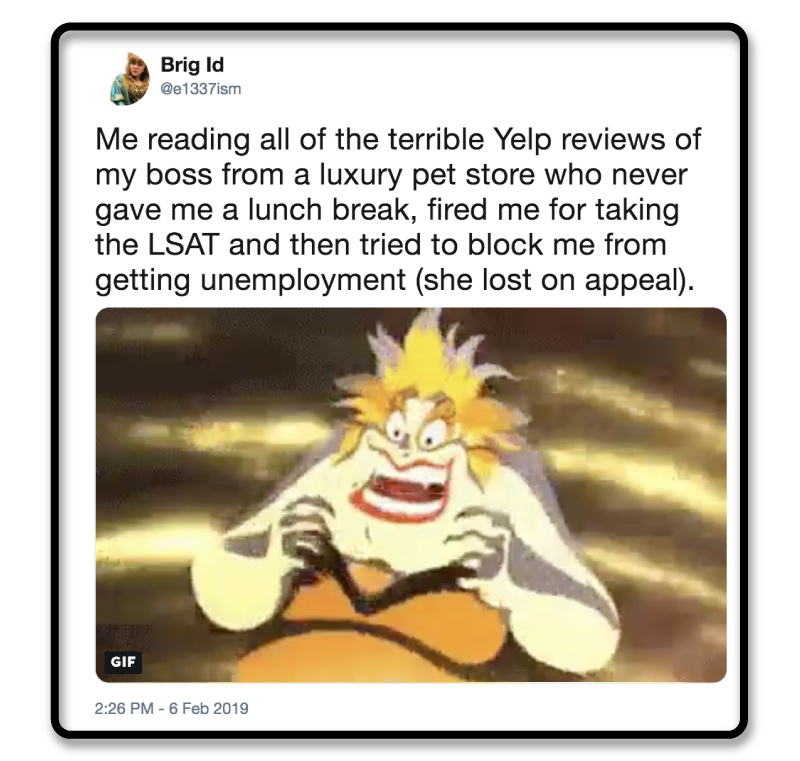 Every once in a while you get to see a former horrible boss be brought to justice in one way or another.