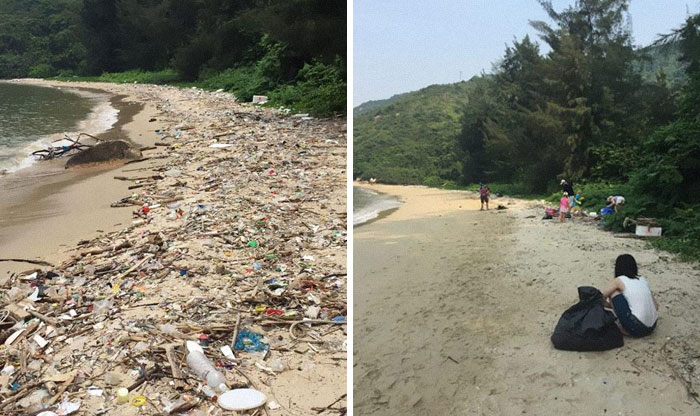 Hashtags and viral challenges usually represent funny or iconic moments in pop culture, but there is a new viral movement that has taken off whose goal isn’t to entertain – but to help save the planet.

The hashtag blew up on social media after a reddit user posted a screenshot of someone who had completed the challenge, with the caption: “Here is a new #challenge for all you bored teens. Take a photo of an area that needs some cleaning or maintenance then take a photo after you have done something about it, and post it here.” Scroll down below to see some of the best photos from this environmentally-friendly hashtag and don’t forget to upvote your favs!

1.  “Here’s my contribution to #trashtag. My (large) family and I cleaned up this beach we campe near over the summer” 2.  “#trashtag seems to be trending. This one’s from Nepal” Even when waste is put into dump sites it finds other ways of getting out into the world. As trash decomposes it can release toxins and harmful chemicals that leak into the soil, which then spreads into the water and air. While this can seem life a slow process that might not directly affect you, improper waste management can have deadly consequences in real time. In 1998 and 1999 thousands of people were killed in Bangladesh by flood waters caused by piled up waste in the sewers.

3.  “#trashtag Manila Bay has been considered one of the dirtiest bays across the world. After 11 years, the Supreme Court finally issued a cleanup order which thousands of volunteers joined last January 27, 2019.” 4.  “#trashtag from Vietnam, youngsters gather voluntarily to clean up the environment and to raise public awareness” Worldwide, each individual person generates an average of 0.74 kilograms of waste per day, but ranges widely, from 0.11 to 4.54 kilograms. High-income countries generate about 34 percent, or 683 million tonnes, of the world’s waste, even though they only account for 16 percent of the world’s population.

5.  “Around 500 volunteers helped with the cleanup of 5 million kg of trash from this Mumbai beach.” 6.  “This should be the new challenge to make the world a better place” While every tip of the planet seems to be filled with waste, the only place where you can almost escape the endless litter is Antartica. It is protected by the Antarctic Treaty, a treaty that prohibits military activity, mineral mining, nuclear explosions and nuclear waste disposal.

7.  Just one of the many days cleaning up our local water ways. Featuring Selma Kayak and Large Marge the Garbage Barge 8.  3 women cleaned up this area together. Landfills are the designated place where trash belongs and with so much waste being thrown in them things get densely packed in. For trash degradation it goes through an anaerobic process (without air), which creates huge amounts of methane gas – a greenhouse gas with an environmental impact 25x greater than carbon dioxide.