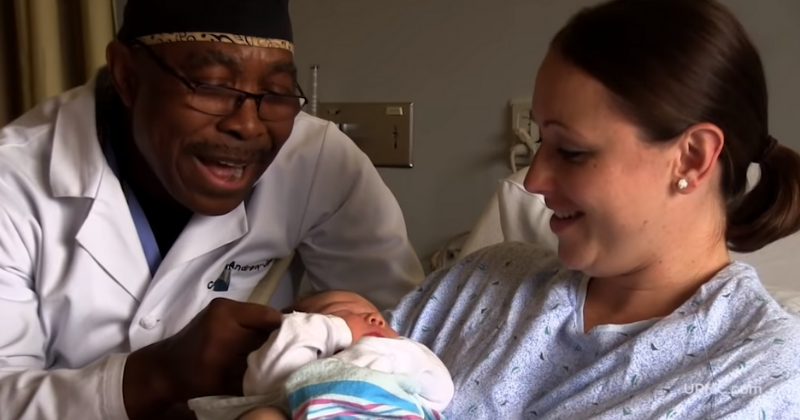 If there’s a woman ready for delivery at the UPMC Hospital and Dr. Carey is delivering the baby, it is sure that the infant will come into the world like it’s a true celebration. Ever since Dr. Carey Andrew-Jaja was a young resident, he has been singing “Happy birthday to you” or “What a wonderful world” to every single one of the babies he brings into the world. The best part? The doctor has welcomed 8,000 babies during the period of over 3 decades of his career in the delivery room.

Unsurprisingly, Carey soon earned the title of the “Singing Doctor”

“When I was [doing my residency at Pittsburgh’s] Allegheny General, there was a physician who used to sing ‘Happy Birthday’ very lustily to his babies,” Dr. Andrew-Jaja previously told the Pittsburgh Post-Gazette. “I liked that, and I would join him and we’d both really belt it out. When he was retiring, he asked me to continue that tradition. ‘It’s all yours,’ he told me.”

Every single baby matters and they are all going to grow up and be a son or daughter, a mother or father, a teacher or a doctor, an artist or a singer. And the doctor wants to celebrate the beginning of a new life with his singing. “When I’m singing to those babies, I’m singing to a future important person,” Dr. Carey adds. “It’s a beautiful world we live in. You forget about all the crisis going on everywhere for a moment when you see that miracle of life in front of you.”

The first few moments after a newborn is delivered

The sights, sounds and the sense of touch, are all the first new sensations the infant experiences. And having a sooting voice singing a hearty song is a unique way of building a connection with a baby for the first time. And Carey believes that everything in life is meant to have the same enthusiasm and zeal. “Confront every encounter with a smile on your face and a song in your heart,” he said, according to the UPMC HealthBeat.

According to the doctor, when he holds a baby in his hand, he is reminded of the miracle of life, and in that moment he forgets all about the chaos and the worries of life. Carey believes that every newborn he holds is precious and he wants to celebrate each life that he brings into the world. He feels that the connection is “instantaneous” and an absolute joy to hold a baby in his arms and sing to him or her. After delivering 8,000 babies, being in the delivery room might feel more like a job rather than a reason of celebration, but for the Singing Doctor, it is something that never ceases to amaze him. Carey still has the same energy and that big endearing smile when he sees a newborn, even after decades.

He has even delivered babies from two different generations of the same family. Another comment said, “Dr. Jaja is an awesome doctor even without doing his. He is really this genuine and concerned. My youngest did get a Happy Birthday serenade from Dr. Jaja which made the event a little extra special.”

Watch the Singing Doctor adding something special to the work he does.