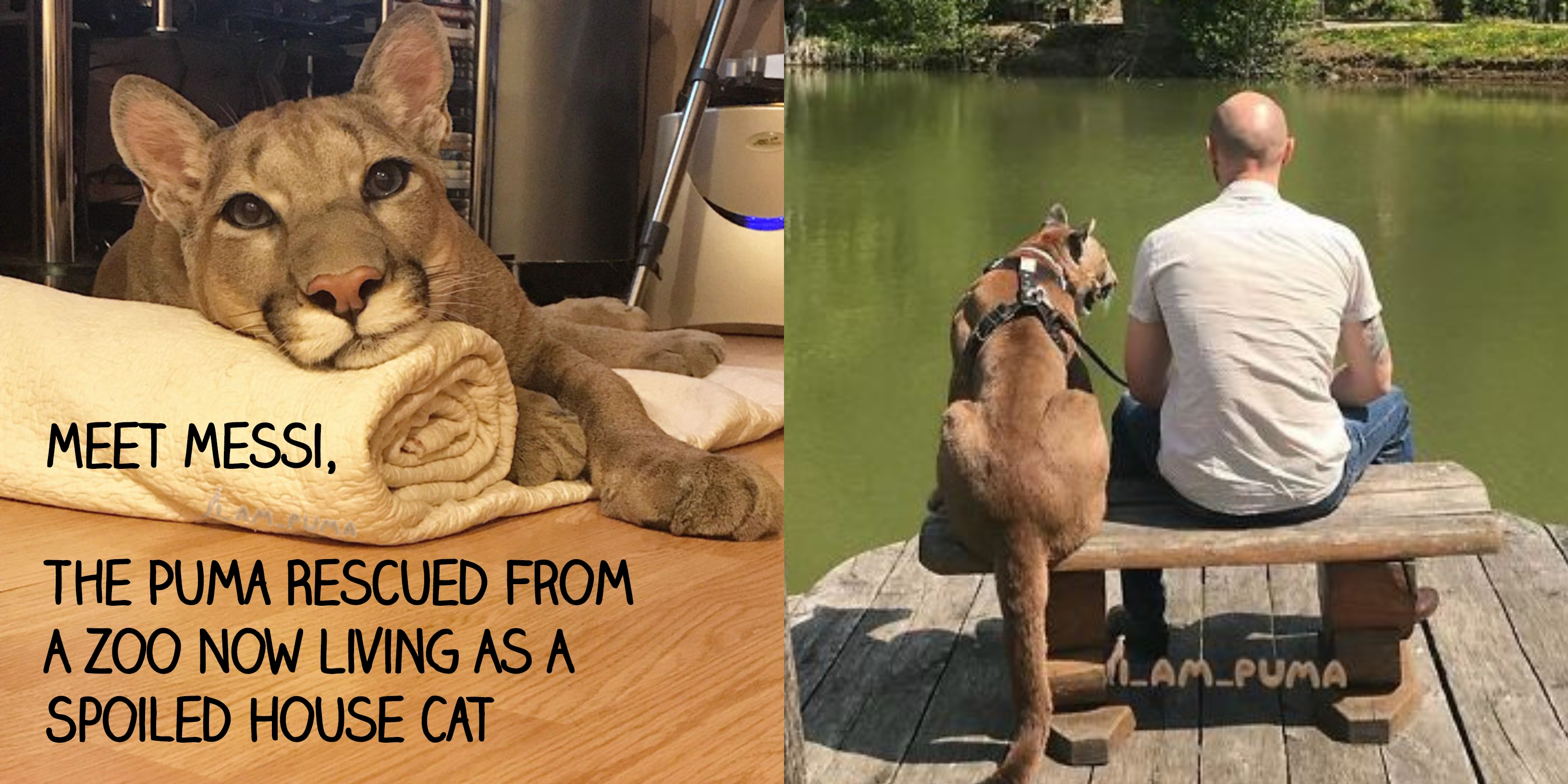 Meet Messi, The 90lb puma who lives with their loving owners Mariya and Aleksandr Dmitriev in Russia.

The couple first met Messi at the Saransk Zoo in Penza, Russia when he was just 8 years old, and decided they wanted Messi a part of their lives, and had to have him.

Messi was one of three puma cubs that were born at the Zoo.

All of them were named after famous soccer players to celebrate the Russian city hosting four of the matching from the World Cup.

Other than Messi, the other two cubs were named Suarez and Neymar.

However, one of the cubs, Messi, was sold to the zoo when he was three months old and suffering from health problems.

With the zoo unable to fully take care of the sick cub, and the couple quickly falling in love with him, the Dmitriev’s pleaded to the zoo and asked if they could buy him.

According Mariya, Aleksandr, 38, always dreamed of owning a larger than life feline, “He always thought about having a lynx – never a puma.

It’s hard to explain but we believe that having this puma is part of our destiny.”

“We had three days of thinking hard about whether it was moral to keep a puma, and whether it was common sense to have one. But nothing could fight our sudden wish,” Mariya, 28, told the Mirror.

“So we went to the zoo and started negotiations to buy Messi.

We were surprised ourselves when they agreed.”

Taking care of a big cat like Messi is not like taking care of any other house pet, and was a challenge for the couple in many ways.

Beyond just being the wild animal that he his, Messi also needed a lot of extra medical attention and care, ‘‘he was quite weak and demanded a lot of attention,” said Mariya.

And even though the couple was able to nurse the cub back to full health, he only grew to about two-thirds of the size of the average puma.

Which is still quite large compared to most house pets.

And just like any other pet you’d have, Messi requires lots and lots of exercise.

To help with this, his parents bought him a special harness and coat to take him on walks.

“He is like a dog. We started taking him for a walk, step by step.

The animal hadn’t been really active before,” Aleksandr said in an interview with RT, “Now we walk a lot twice a day, as it’s supposed to be. It doesn’t differ much from owning a dog in this sense.”

However unlike simply training your dog to obey commands and do a few tricks, this lovable puma was not the easiest to train.

The couple tried their best to find a wild animal handler to help train Messi, but were unsuccessful.

They were finally able to find a dog training school the would allow Messi to join.

Now Messi can respond to about 10 different commands.

“He convinced us with his behavior that he’s a full member of our family and that he wouldn’t be doing anything bad apart from some small naughty things. He’s very kind and likes contact.

He gets on very well with people,” says Aleksandr.

Because having an exotic cat as a house pet is so rare, the Dmitrievs have begun documenting their life with Messi on social media, and people are completely in love with all their posts.

Messi the puma has over 500k followers on his Instagram @I_am_puma and over 175k subscribers on his Youtube channel.

Living in a one bedroom apartment with Messi can be challenging, but the couple has done their best to accommodate their large and loving companion.

They even converted their hallway into “Messi’s den”, with a tree, hiding hole, and bamboo wall.

“He is just an ordinary cat, but a big one. He has all the habits of a cat,” says Aleksandr.

As you would imagine there have been some animal and environmental rights activists who have objections to the Dmitrievs keeping this exotic animal in their home.

Many of these activists believe Messi belongs on a wildlife reserve or in a sanctuary.

While others like to point out the clear dangers living with wild animal can put you in.

But the couple believes that he wouldn’t survive in the wild or alongside other animals as he has never lived alone in the wild and been with the couple since he was a cub.

“Of course it’s quite dangerous having such a large cat at home, but Messi is a special animal,” Mariya told the Mirror.

What do you think about this couples decision to live with a large but lovable puma like Messi?

Check out Messi playing around with his favorite toys