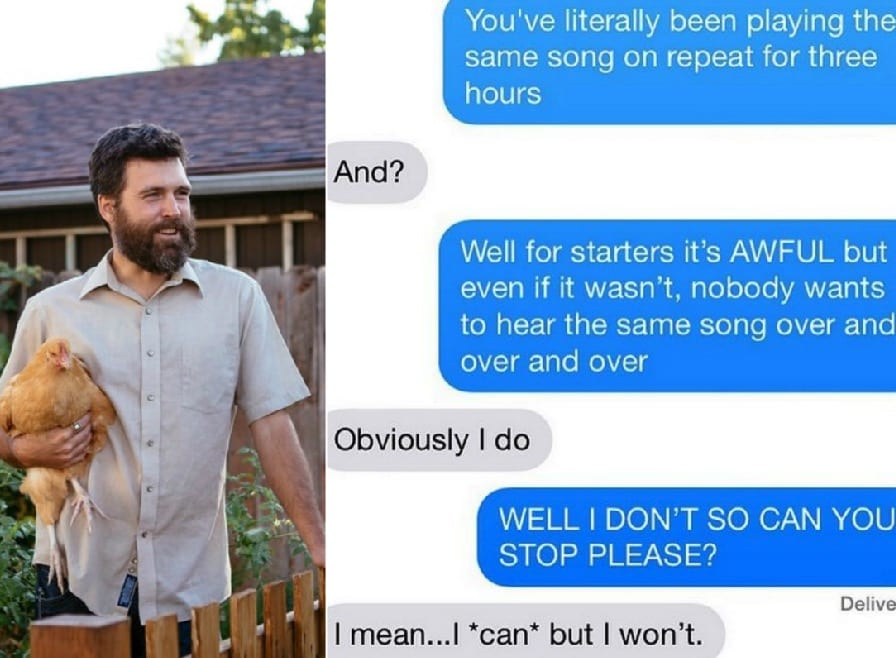 When you find the perfect place to live, you probably spend ages wandering around the house or the apartment, checking out all of the little details that you’ve fallen in love with. You marvel at the high ceilings, you can’t quite believe the size of the rooms, you dream of relaxing in the roll-top bathtub, you imagine using your green fingers to make the backyard something special, and you probably check out the views without quite believing that it’s all yours to enjoy.

However, do you ever think about the people who live next door, above you, or even underneath you? There’s a high chance that you don’t because you’re just so distracted. We have a feeling that these people wish they had done a little more research into the people they later got to call their neighbors…

Always time for a burrito

There are two types of neighbors in this world. There are those who simply ignore you as you walk past, and there are those who like to check in every now and again to make sure you’re okay. Ryan was curious as to whether this person had gotten over their breakup, and also wondered if they wanted to go for a burrito with them.

When he got politely rejected, he wasn’t too upset about it. After all, all he really wanted was to have someone pay for a burrito with him. Although we’d be annoyed, this guy knows that there is always time for a burrito, even if you don’t have the cash.

Well, Melissa was fed up with being someone she wasn’t, and she decided to do something about it. She wanted to create some rules and boundaries between herself and her neighbor, and she wanted their relationship to be based around a simple nod. Who doesn’t? It seems as though her neighbor didn’t want that to be the case because that nod and finger combination is ruthless.

As soon as you move in, you sign some form of unofficial document within the neighborly code. If you have some milk and they don’t have any, you offer to lend them some. While you know that you will never have that specific milk returned to you, you feel as though you’re doing your neighborly duty by helping them out of a sticky (and milk-less) situation. 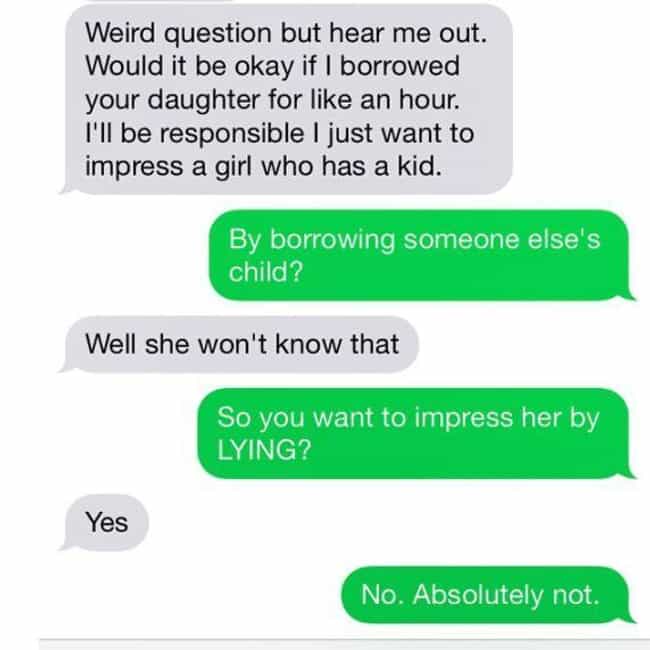 However, there has to be a limit when it comes to this generosity, and this neighbor was not quite ready to hand over her daughter. No matter how hard her neighbor tried to explain that handing over the child would be the only way to impress a girl who has a kid, they just wouldn’t budge. We don’t blame them.

But not too seriously

There’s nothing worse than a loud neighbor, and hearing them crashing and banging around their apartment in the early hours of the morning is not something you want to wake up to. Thankfully, you can always send them a passive-aggressive text message to get them to stop if you have their number, and that’s exactly what this person did.

Of course, your neighbor is also within their right to send a passive-aggressive text back – and this is just downright hilarious. Personally, we love the image of someone vacuuming while doing a little shimmy around the apartment. That makes us happy, and we might do the same when we get home.

It’s always good to be civil with your neighbors. After all, they can make your life extremely difficult if you get on their bad side, and everyone just wants to live in peace. Because of this, it’s important to have a chat with them every now and then and check in to see how they’re doing.

However, there’s a difference between checking in on how someone is doing and being a little too overbearing. While we appreciate the fact that this person is just trying to motivate their neighbor, we wouldn’t be too happy to receive this every week. It’s a little too much, and we just know that the Monday blues would immediately kick in.

If you’re allowed pets in your apartment building, you are truly living the good life. You might surround yourself with dogs, you might curl up with your cats, or you might even buy yourself a pig. Because why not, ey?

However, you can almost guarantee that there will be someone who doesn’t like your choice of pet, and Megan from 2A was not too happy with the fact that her neighbor was seen walking a pig. Thankfully, this person had the greatest response. That’s a true mic drop.

When it comes to your property and your land, you can do whatever you want with it. You can paint it any color, you can fill it with anything you want, and you can even put up some wind chimes if you want.

Because it’s your land, you don’t have to listen to anyone else – which is probably why this person put up their wind chimes to drown out the noise of their neighbors. Sadly, this neighbor wasn’t a fan of the wind chimes, but they would have to do until the neighbor found an alternative. Like the audio of their parents.

Being a neighbor is hard work. You have to check on their house when they’re away, you have to make sure nobody is stealing from them, and you even have to take in their packages.

This neighbor realized that they were doing so much for someone else for no real gain of their own, and decided to do something about it. They took a little piece of the package for payment, and it just so happened that that payment came in the form of cookies. What a result. We hope they were chocolate chip.

If you live next to your landlord, things can sometimes get pretty awkward. Because you don’t own your property you have to be extra careful when it comes to the upkeep of the apartment, and you have to hastily give it a clean when you know they are coming around to inspect.

When one tenant forgot to disclose the fact that they had a few stains on the carpet, the landlord wasn’t happy. While we agree that he has the right to be irritated, we have to say that the tenant’s response is truly something special.

I saw you wearing it

If you get along with your neighbor, it can often come in very handy. After all, it’s sometimes like having an extra friend. You can borrow their kitchen utensils, you can borrow some food or drink, and you can even borrow their clothes if you’re the same size. 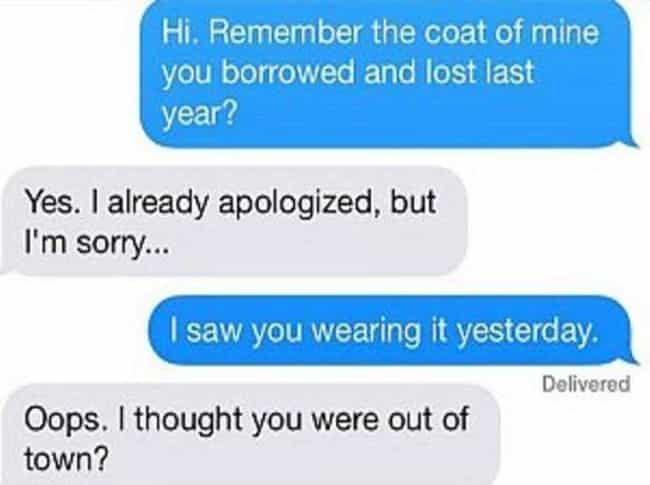 However, it’s important that you remember to give them everything back – or else. When this neighbor borrowed a coat, they thought they had gotten away with keeping it for themselves. Oh, how wrong they were because they definitely weren’t out of town!

When you live in an apartment block, the buzzer situation is always going to be an issue. Every year you live there, you will be speaking to people who meant to press a different buzzer, and you also have to cope with your own not working every once in a while.

That’s exactly what one person had to deal with, but they thought of an innovative idea. They asked their neighbor to stay in just a few minutes to grab their pizza because they would be a true monster to leave before pizza.

You don’t need a man

Your neighbor probably knows more about you than anyone else, because they hear you when you are in your most comfortable environment.

They might hear you sing in the shower, they might hear you cry along to your 3rd rom-com of the evening, and they might even hear you arguing with your significant other. While it may be an unwritten rule to never discuss this with each other, this neighbor decided to break that rule and tell this person that they didn’t need a man. And that they’re not good enough for Jesus.

The best thing about living with other people around you is that nobody can pinpoint the culprit. If you do something wrong, you can blame it on someone else, and you can avoid the blame entirely. What could be better than that?

When this person was accused of puking in the stairwell by their neighbor, they decided to ditch the Christmas spirit, ditch the truth, and ditch the puke and keep it there. No matter how hard the neighbor tried to get them to clean it, only Maury could tell them the truth.

It’s always difficult when you have thin walls. While you want to be respectful and not annoy your neighbors, you’re also conscious of the fact that if you’re paying the rent, you can do whatever the heck you want to do.

Have you ever truly regret giving someone your number? Normally this happens on a night out, but this person soon discovered that giving their neighbor their cell phone number was the worst thing they could ever do.

Instead of being asked for some sugar, they were inundated with question after question. While this wouldn’t have been an issue if these questions were about the meaning of life or the latest episode of The Bachelor, the actual questions were just as weird as anything. Let’s hope they blocked them after this.

Will you get a dog?

Most of us wish to surround ourselves with dogs because they are truly a blessing on the Earth. While there’s nothing we want more in life, we are also realists. We know that we just don’t have the time or the money to keep a dog – which is why we have to resort to other measures.

When this neighbor realized that they really wanted a dog in their life, they decided to ask their own neighbor to take on the glory. Sadly, the answer was not what they were expecting, and we don’t think they’ll be getting a dog any time soon.